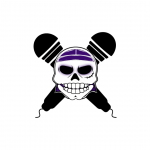 What’s Good, Supernovas? WELCOME TO 2021! It’s not often that the crew gets an opportunity to make recommendations and detail what series we’re reading. We thought it would be nice to discuss what’s currently in our queue and on our minds + throw a few titles out there for you all to check out. In this episode, we recommend 1 series we enjoy right now and we have some light conversation surrounding Sensei Le Glove’s rapid-fire questions.

My Love Story (Hulu): Takeo Goda is a big guy with a big heart, but his looks scare off the girls he likes! It doesn’t help that ladies love his attractive best friend, Makoto Sunakawa. Though, he doesn’t resent Sunakawa for this at all, and by high school, Takeo has accepted his fate. But his kindness earns him a chance at love when he saves a girl from being harassed on the train. Takeo finds himself falling for her, and he’s sure he doesn’t stand a chance, but anything can happen, especially in a love story!

Jujutsu Kaisen (Crunchyroll): A boy fights… for “the right death.”

Hardship, regret, shame: the negative feelings that humans feel become curses that lurk in our everyday lives. The curses run rampant throughout the world, capable of leading people to terrible misfortune and even death. What’s more, the curses can only be exorcised by another curse.

Itadori Yuuji is a boy with tremendous physical strength, though he lives a completely ordinary high school life. One day, to save a classmate who has been attacked by curses, he eats the finger of Ryomen Sukuna, taking the curse into his own soul. From then on, he shares one body with Ryomen Sukuna. Guided by the most powerful of sorcerers, Gojou Satoru, Itadori is admitted to the Tokyo Metropolitan Jujutsu Technical High School, an organization that fights the curses… and thus begins the heroic tale of a boy who became a curse to exorcise a curse, a life from which he could never turn back.

Attack On Titan (Crunchyroll); Japanese manga series written and illustrated by Hajime Isayama. It is set in a world where humanity lives inside cities surrounded by enormous walls that protect them from gigantic man-eating humanoids referred to as Titans; the story follows Eren Yeager, who vows to exterminate the Titans after a Titan brings about the destruction of his hometown and the death of his mother. Attack on Titan has been serialized in Kodansha’s monthly Bessatsu Shōnen Magazine since September 2009 and collected into 32 tankōbon volumes as of September 2020.

Golden Kamuy (Crunchyroll): The story takes place in the mighty Northern field of Hokkaido, the time is in the turbulent late Meiji Era.

A post war soldier Sugimoto, aka, “Immortal Sugimoto” —who survived the lethal Japan-Russo War—was in need of large sums of money for a particular purpose….
What awaited Sugimoto, who stepped into Hokkaido’s Gold Rush with dreams of making a fortune at a single stroke, was a tattoo map leading to a hidden treasure based on hints inscribed on the bodies of convicts in Abashiri Prison?!

The magnificent nature of Hokkaido vs vicious convicts and the meeting with a pure Ainu girl, Ashiripa!! A survival battle for a hidden treasure hunt begins! 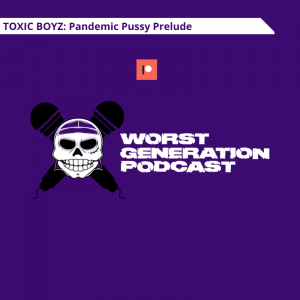 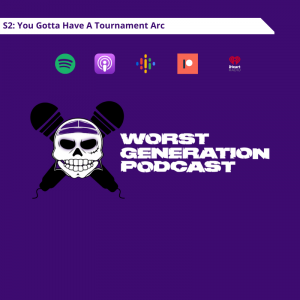 You Gotta Have A Tournament Arc

Run My Fade is progressing nicely through its tournament arc. One Piece Leek has many more planned and we thought it was about time to talk about tournaments a bit. Today’s episode discusses the types of arcs you mainly see in Shonen Battle style…

In this week’s episode, we’ll be discussing Eiichiro Oda’s 1-shot Romance Dawn, the chapter 0 “prequel” to One Piece. 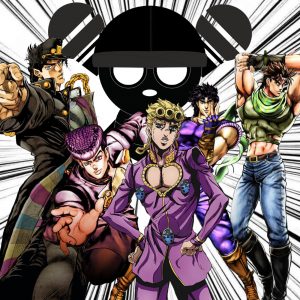 This is Part 2 of our Bizarre Episode focusing on the unique entity that is Jojo’s Bizarre Adventure. If you haven’t seen Part 1 yet please do yourself a favor and listen now before going any further. If ya heard the glory of Part 1 then proceed to… 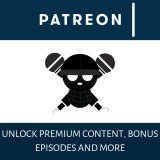 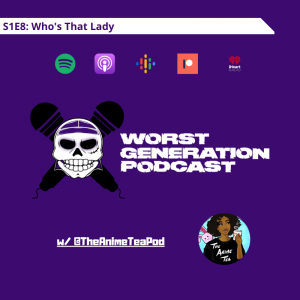 Today we will be discussing some of the most powerful characters in all of anime. Formidable, intelligent, charismatic, attractive and much more, captivating female characters are the focus here! We’ll discuss commonly used female tropes, storylines…

The Worst Gen Crew explores the world of Anime and Manga as professional Black, Millennial, Nerds. Our love language is slander and excellent recommendations. Inspired by the popular Shonen Jump series One Piece, the crew believes in the Absolute Freedom of opinion. Consequently, we deliver Absolute Justice to those who do not!

Join The Journey! Download Your Free Anime and Manga Guide!

@Niiick_42
Read More
I'm 5 minutes into @worstgen_pod and I'm in love. Something about hearing nigga juxtaposed with anime. My life is complete.
T3theKing

Read More
As a sporadic listener of the pod cast I love that no matter which episode I click on I never feel lost. I appreciated the conversation with Brago D Ace and the pod giving incite to not only how youtube works but how podcasting works. I plan on starting one of my own soon and will definitely play this episode back to pick up the gems that were dropped.
trapsolekage

Read More
For The Culture | People who speak a language I can relate to, y’all are funny asf 🙏🏾
Fire Fist Chace ,

Read More
As a fan of anime this is really cool to listen to when I’m driving by myself because nobody I talk to watches that stuff like I do and it feels like I’m in the podcast talking with them
iZoMBi3

Read More
The Akatsuki of Anime Pods | Love these talented guys and gals. Funny as hell and great perspective. 10/10 highly recommend
AnotherSJFan

Read More
The guys and their guests are passionate and expressive about what they’re enjoying watching/reading and it comes off in the podcast. Recommend to anyone just wanting to hear some anime talk between friends
@NakimushiArt
Read More
Hey guys, listen to @BlanimePodcast & @worstgen_pod if you're still on the lookout for great podcasts about everything Anime. Relieved face If you're planning on reading my releasing Manga, then you MUST cause you are missing out if you don't. Go and support awesome people with great taste!
SplashDLoop

Read More
Finally!! Anime takes in a language I can understand. 😂😂
Previous
Next